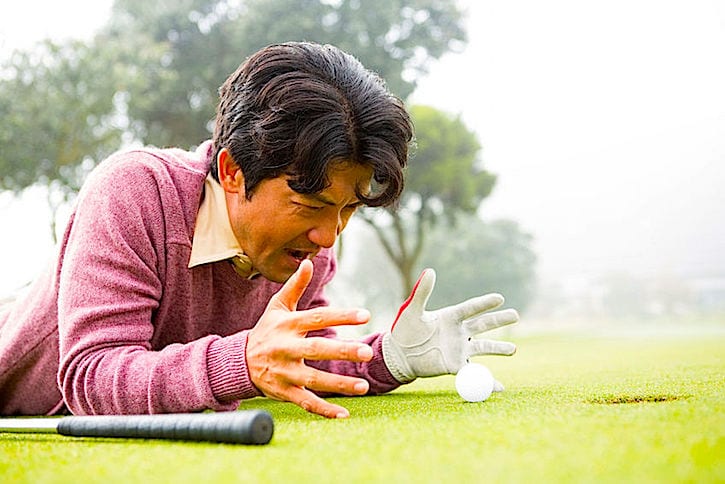 Many chiropractors think the biggest frustration in their chiropractic practice sale or transition is finding the perfect prospect.

Truth be told, the search for that special someone is not an easy task. Especially in today’s marketplace when those looking to get out literally outnumber those looking to get in. But while looking for a chiropractor to fit your practice may require the most patience with the process, I would disagree that it’s the most frustrating part of your transition.

In fact, I believe there is another aspect of your transition that can be far more frustrating (and far more devastating to you and your practice sale). Done wrong, it can literally sabotage your sale or transition altogether. In golf terms, it’s called your “short game” and here’s how it applies to your transition.

Before we get too far along, I better first confess that I am not a golfer. So my observations are purely from watching other golfers – either professionals on TV, friends that want to be professionals or family members that have long missed their chance at being a decent golfer or professionals. And I do know just enough about golf to be dangerous.

For example, I know that when a golfer slices their first shot, it is very common that they appear unhappy. Their fellow duffers or caddy may offer some small condolences and typically, the announcers will softly give some variation of a “that’s too bad” response to this less-than-ideal shot.

But, since it’s their first attempt of the round, no one comes unglued. The golfer is usually mildly perturbed. There’s disappointment in the air. But everyone seems to acknowledge one thing: there’s still time to correct for the initially bad start.

On the other hand, when the golfer misses a putt that they were expecting to make, the reaction is volcanic. The crowd lets out a collective groan that immediately rubs salt in the wound of the unfortunate duffer. Dependent on his temperament, the culprit himself may resort to flinging the club, flailing his arms in disgust or even breaking their instrument of torture as if it their previously-perfect putter had suddenly become massively defective. Friends on the course don’t know how to offer even most sympathetic responses to the golfer who would let his short game go awry and the golfer’s enemies (or those who like to see him suffer) begin a series of cackles that would put hyenas to shame. To top it all off, the announcers then kick the poor fella when he’s down with some brilliantly obvious shaming remarks like “Well, if he thinks he’s gonna have any chance at winning, he can’t be missing easy putts like that one. To be a winner, you gotta have a good short game” — as if the golfer purposefully piddled his standing so he could instantly take a more comfortable spot in last place.

The Short Game of Your Transition

So what does this have to do with your transition? Chiropractors will experience nearly the same attitudes during their transition as the golfer who is still optimistic when he goofs his first shot and who gets incredibly agitated at missing a putt. If you can’t find a prospect right away, it’s irritating but you’re still hopeful that the process will pan out well. But if and when you get close to the end (the tee, in golf terms) and you lose that prospect (because of your “short game”) you will experience emotions similar to the golf eruptions seen and described above.

In other words, it’s incredibly frustrating to lose a prospect late in the game of your transition and it may make you want to scream, shout or break something.

Don’t. It doesn’t help. And there’s help available for you.

Any golfer who reliably could get himself on the green and then repeatedly blew it would probably either seek help with his short game or give up golf altogether. Your transition really isn’t much different – except that you are losing out on a lot more if you give up because your short game isn’t good. Here’s what I mean:

I’ve seen multiple clients whose instincts were to declare their prospect or buyer a bust because some obstacle appeared in the way. In other words, these docs found a prospect, did the interviews, agreed to price, terms and everything else and then…splat. The deal is dropped. Usually, the buyer will say they can’t afford the practice or give some sort of vague response that it won’t work for them. And the seller mopes away. WRONG MOVE!

Does the golfer just quit when he slices his first shot? Of course not, he keeps going! On the other hand, does the golfer quit when he missed a putt? He may wish we were on another planet, but he keeps trying to putt that dimpled ball into the hole! Similarly, if he repeatedly keeps missing his putts he (usually) doesn’t give up golf, he goes and gets an expert, a coach, ANYONE to help him.

If we switch sports, the starting pitcher doesn’t just lose the game for the team because he’s tired. They bring in “the closer” to finish what’s started. And these relievers often have weird windups, pitching styles that are way different than the previous pitchers and other strategies and tactics that change things up – and work to get the win or the save.

You should do the same.

Don’t Give Up On Your Short Game!

Getting a buyer who agrees to your transition or practice sale doesn’t mean you are home free. It means that you need to focus on getting things finished. And if it isn’t going so well, you need help with your short game!

Don’t just give up and say “oh well, guess I got to go find someone else.” No. No and No! Bring in the reliever. Bring in the coach. Bring in creative strategies and solutions that will enable your chiropractic practice sale or transition to be a success!

In short, don’t sabotage your sale or transition, because you don’t have a short game.

Get one. Or get help now.

Next Steps For Your Short or Long Game

If you’re not quite there yet, there’s good news. You can instantly improve your short game by improving the options you take in your long game. By learning more about how to Sell, Switch or Slow Down, you can increase your chances for success and increase your chances at maximizing the value of your practice. Check out our upcoming FREE Webinar to get the latest strategies for transition success!

And yes, if your short game needs help now, we’d love to assist you before you let a good buyer go bye-bye. You can get more info on our chiropractic transition services here.